The first century Jewish historian Josephus believed there was a connection between the twelve stones in Aaron's breastplate (signifying the tribes of Israel, as described in the Book of Exodus), the twelve months of the year, and the twelve signs of the zodiac.[1]:275–306 Translations and interpretations of the passage in Exodus regarding the breastplate have varied widely, with Josephus himself giving two different lists for the twelve stones.[2]:130–131 George Frederick Kunz argues that Josephus saw the breastplate of the Second Temple, not the one described in Exodus. St. Jerome, referencing Josephus, said the Foundation Stones of the New Jerusalem (Revelation 21:19–20) would be appropriate for Christians to use.[3]:294

In the eighth and ninth century, religious treatises associating a particular stone with an apostle were written, so that "their name would be inscribed on the Foundation Stones, and his virtue."[3]:299Practice became to keep twelve stones and wear one a month.[3]:298 The custom of wearing a single birthstone is only a few centuries old, though modern authorities differ on dates. Kunz places the custom in eighteenth century Poland, while the Gemological Institute of America starts it in Germany in the 1560s.[3]:293 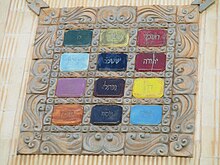 Recreation of the high priest's breastplate in front of the central Sephardic synagogue in Ramat Gan, Israel

Modern lists of birthstones have little to do with either the breastplate or the Foundation Stones of Christianity. Tastes, customs and confusing translations have distanced them from their historical origins,[3]:310 with one author calling the 1912 Kansas list (see below) "nothing but a piece of unfounded salesmanship."[2]:132

There are poems which match each month of the Gregorian calendar with a birthstone. These are traditional stones of English-speaking societies. Tiffany & Co. published these poems "of unknown author" for the first time in a pamphlet in 1870.[4]

In 1912, in an effort to standardize birthstones, the (American) National Association of Jewelers (now called Jewelers of America) met in Kansas and officially adopted a list.[1]:317 The Jewelry Industry Council of America updated the list in 1952[3]:311 by adding Alexandrite for June, citrine for November and pink tourmaline for October. They also replaced December's lapis with zircon and switched the primary/alternative gems for March. The American Gem Trade Association added tanzanite as a December birthstone in 2002.[5] In 2016, the American Gem Trade Association and Jewelers of America added spinel as an additional birthstone for August.[6] Britain's National Association of Goldsmiths created their own standardized list of birthstones in 1937.[7]

Eastern cultures recognize a similar range of gemstones associated with birth, though rather than associating a gem with a birth month, gemstones are associated with celestial bodies, and astrology is employed to determine the gemstones most closely associated with and beneficial to a particular individual. For example, in Hinduism there are nine gemstones associated with the Navagraha (celestial forces including the planets, the sun, and the moon), known in Sanskrit as Navaratna (nine gems). At birth, an astrological chart is calculated, and certain stones are recommended to be worn on the body to ward off potential problems based on the place of these forces in the sky at the exact place and time of birth.[8]

Birthday (day of the week) stones

While the term "birthday stone" is sometimes used as a synonym for birthstone, each day of the week is also assigned a unique gemstone and these assignments are distinct from the monthly assignments.[1]